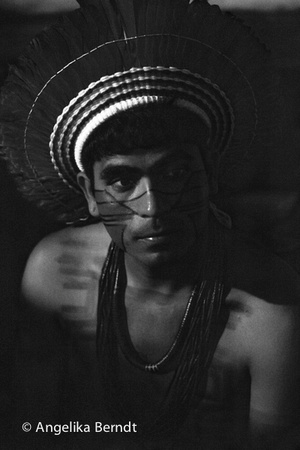 This photo was taken while meeting some of the members from the Kariri-Xocó in Paraty, Rio de Janeiro. The Kariri-Xocó are from the northeast of Brazil and live in the state of Alagoas. Some of their members travel around Brazil to introduce the general public to their culture and continued struggle for survival. The name Kariri-Xocó was adopted some 100 years ago when the Xocó, who found themselves driven off their land by invading farmers, sought refuge with the Kariri on the other side of the river to survive. Today the Kariri-Xocó survive as an impoverished community which also includes survivors from other indigenous tribes and quilombos.